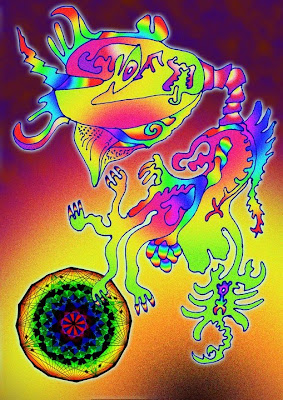 The night you swam with sharks my heart beat in staccato rhythm as you disappeared under the water's surface, as black and smooth as basalt. I would have thrown myself in after you but we were not alone. You didn't belong to me, even though my hands knew the geography of your body, the mountains and valleys, every sin of the flesh. That summer, I ran hot with fever, every word every thought was a spark and I stretched my hand to the flames and waited to burn. I drowned in you on the front seats of cars, in deserted parking lots. We traded scars, my blood bruises for your lasso-red welts and it was like we were committing a crime. That night I waited for you to die or live and when you finally surfaced it was the sound of something breaking. You came to me cold and wet, kissed me when no one was looking, a mouthful of salt and bitter memory. I read somewhere once that sharks die if they stop moving, they sink to the bottom of the ocean and slowly suffocate and I wondered how do they sleep, what do they see in their dreams?

BEARS
Last night, I dreamt a bear was trying to eat its way through the house, crashing from room to room, a staggering punch-drunk prizefighter scarring the hardwood floors. It was a grizzly, like the one that killed those people in Alaska, and later all they found were pieces that fit into a couple of black plastic garbage bags. We didn't think to ask where it came from, instead we huddled in the bedroom, me pressed against the door trying to hold it off, you with hands on hips strangely calm. In the dream, you wanted to reason with it, as if such a thing were possible. You were always trusting like that. Find out what it wants you said but I’m telling you, there's no reasoning with a bear and so I did the only thing I could: I turned to you and whispered, Run.