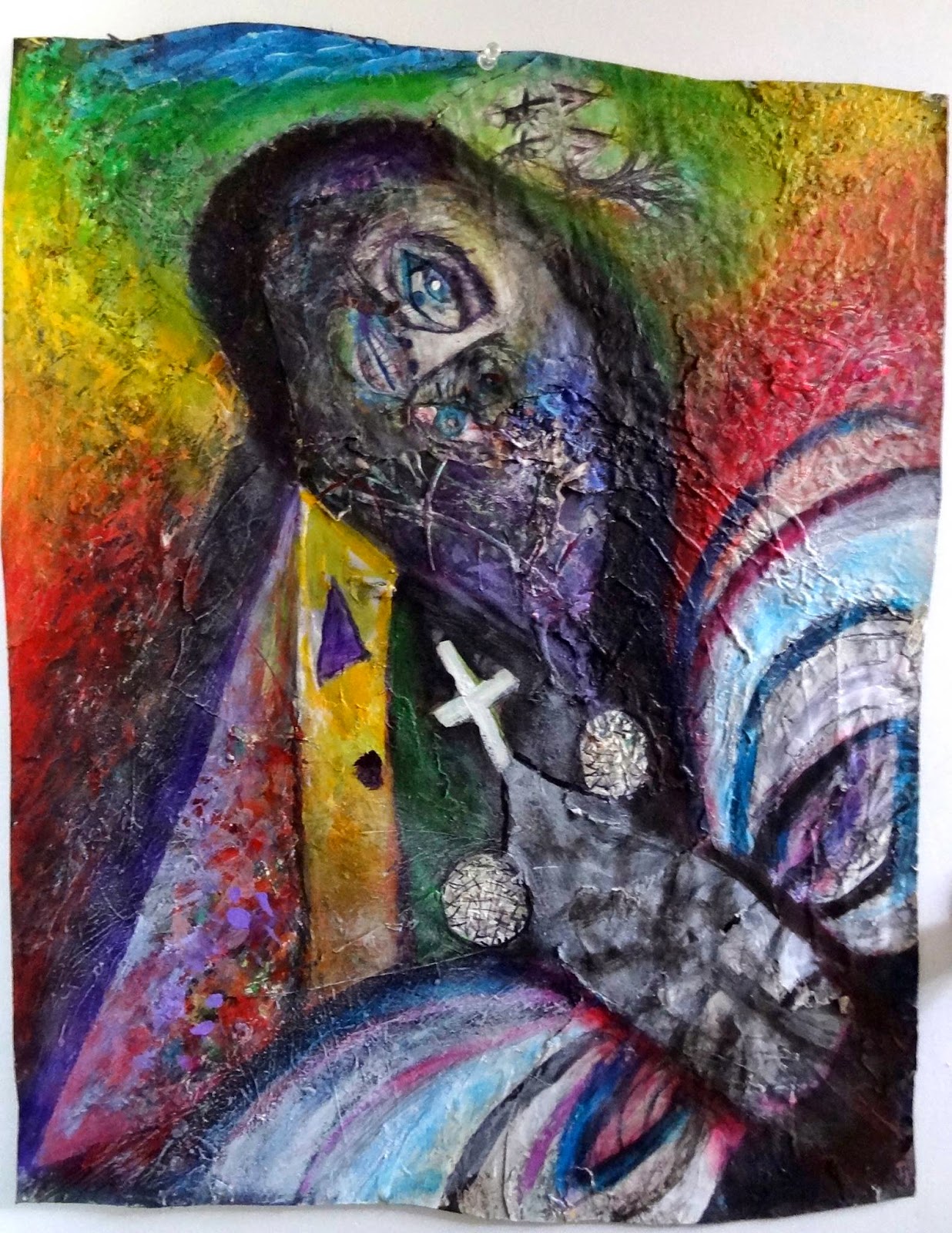 THE LINES OF A CROSS
Kelly Stark

TO WHOM IT MAY CONCERN
Sarah Nolen

IF THIS WAS ANY OTHER DAY, ME AND MATT WOULD TURN AND WALK AWAY, BUT TODAY, WE'LL STAY
Mary Hamilton

The leg I tripped over belonged to a boy sleeping on the sidewalk in New York City. The leg was not very hairy and was covered by clean, white basketball shorts. It looked exactly like my boy’s leg.

When that boy was little, I used to stroke his arm and say "This is my arm,” and he would laugh and ask how it could be my arm when it was attached to his body. But he didn't tell me I was wrong. He would offer me his other arm and I would solemnly refuse it. “No, that one is not mine. I worship only this one.”

THE LINES OF A CROSS - kelly stark

The dog took a big bite of the girl’s leg with its sharp teeth when the girl rode by on her old broke bike. I watched through the glass in our house. She flew off the bike and flat on her back to the dirt on the ground. I knew big dogs should not bite small girls in their small legs but I could not call out to the dog or to the girl. I could not speak.

The next day the dog had its life sucked out. I watched the last few breaths come up from its chest and out through its mouth. I had no way to tell if there was a sound.

Then they wrapped the dead dog in dry cloth. They drew the lines of a cross on their chests with their hands. They stepped past the spot where the girl lay in blood when the now dead dog bit her leg to bits. They did not see what I saw as they walked.

I had lunch with K at American Buffet. I let him drive. He asked if they served open face roast beef. They did indeed. He asked if the sandwich came with a satchel of some kind. No. No they did not.

He lived for two years without running water or heat. No air conditioning, either. He shat in the toilet for the entire two and a half years and it just built up until it touched his backside when he sat down.

When K was in the hospital I tried to cheer him up. I suggested the hospital was haunted. He thought about it. Maybe. There were a lot of electrical outlets, he said.

Once during the winter he came to my workplace but didn't say anything. He stood beside me for about two minutes and then left.

The thing on this guy Phil Spector's head, it was tumbleweed. K told me this on our way back from American Buffet. He was listening to news radio while we turned onto South Central Avenue by the old courthouse. K used to work with me. He asked if he could drive me straight to my desk.

When I realize Mike won’t be getting back up, I turn toward a casino doorway of angry, frightened faces, searching for recognition as a fellow human being, as a baseball fan, as a betting man. Finally I’ll settle for recognition as a drunken brute, but even this seems to be asking too much. Nobody says anything. This animal turns on its tentative, uncertain feet and staggers away, shape-shifting and looking for places to hide. This animal scurries along with tail tucked firmly between its legs, skittish and growling, shying away from human contact like a coyote with a gnawed-off leg.

TO WHOM IT MAY CONCERN - sarah nolen

IF THIS WAS ANY OTHER DAY, ME AND MATT WOULD TURN AND WALK AWAY, BUT TODAY, WE'LL STAY - mary hamilton

Matt swims until he gets to where the water is black and the sky is black and the stars are little white dots above him, reflecting on the water around him. He is an astronaut. He is a fool. He knows he is surrounded by things of infinite size and weight. The whales, he knows there are whales out here. And sharks. And giant squids. And ugly fish with fangs. And broken ships and crashed airplanes and mountains. He knows there are mountains under water. And he knows he is so small now compared to all of this. He knows the odds are against him. He knows what it is to be insignificant, a body at the whim of nature. He knows now everything a man needs to know about love. He finds himself getting wrapped in a cloud of seaweed. A snarling mess of vines and leaves, twisting around him, squeezing him, holding him tight. Pulling him under. He could swim up, he could breathe again. But what is breath when he is being held so close without the threat of ever being let go?

I went to Battery Barn and got batteries. Triple-As, two packs. For the OL’ REMOTE. The OL’ REMOTE is a friend of mine. I got it for Christmas last year from my niece’s husband. Am I related to that person now? I don’t know. How do you figure that out? The remote is universal. It controls everything. It controls the wicked old TV and the VCR and the DVD. It helps me “Sit tight” like it said on the package. “Sit tight” I don’t know about with this bod, which I’ve been meaning to work on, by the way. But it does let me sit in place, more like it. On my chair or on the couch for that matter, which I’ve been doing more often lately. Why? Many reasons. For one it is soft, for another it is a pillow world, and for another you can choose to recline if the mood strikes you. ♫ And the moood often doooooes ♫. My battery packs are now safely in a Tupperware, where they shall remain until they are called for duty in Universal Boy. We all exist in perfect harmony. It is perfect harmony how we exist.

George won’t shut the hell up. Keeps calling the landlord a goddamn S.O.B. and J.O. Lord knows that as soon as he hushes up and tires hisself out, George Jr. and Patience are gonna start. Momma, where are we going? Momma, I want milk. Momma, are we not gonna go to school no more? Momma, what’s S.O.B. and J.O.?  I should tell George to git out the damn car, but I just drive, pickin my cuticles til they bleed.