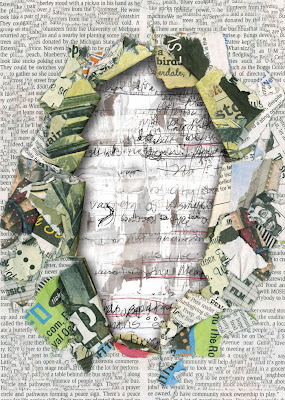 A SERPENT TO STING YOU - nicola belte

We haven’t been out together for ages. We bicker like fuck when we’re drunk, but his sister’s been nagging because she just moved and it’s Halloween and she wants a party. What’s wrong with that?
We go as Frankenstein and his bride and I wear a white nightdress and a black beehive. He’s in a torn jacket with lopsided shoulder pads, covered in green facepaint that’s already looking patchy.
She’s made blood-red rum punch with candy skulls and luminous chopped off fingers floating in it. He drinks most of it and starts eying up Morticia, leaning in really close and looking at her tits telling her that joke that I hate.
The bolts fall off his neck and my wig begins to itch and he pisses on a pumpkin in the garden because he can’t walk. I slap his face and he tells me I’m a boring bitch.
In the morning, our heads ache and the washing machine rattles. For months, our sheets are green.
Nicola Belte
The Crimson Petal and the White
Michel Faber

after the painting by Ramon Casas i Carbó
Defloration. Defoliation. Lost flowers, lost leaves, lost spillages on sheets. Pink perfumed tissue paper. The carnival is over. Confetti on concrete, Cadiz. Deflowered maiden, half-asleep, fumbling over the cool stone shade. Not a stitch on body. Not a hair on pubic bone. We are lost. We are in despair. We look pure and smell impure, as the daylight impinges, stretches across our numb, wormlike sleep (seeping sickly, alcohol-sweet into consciousness). A little white dog is scampering. A little white dog is sniffing the untarnished blue-black hair. A little white dog relieves itself, unseen, on the public pavement.
Laura Elizabeth Woollett
lauraelizabeth@live.com.au
The Malady of Death
Marguerite Duras

He did not know the train from its whistle. But who did anymore? Everyone blamed the economy for everything: terraces pocked with animal tracks, a series of refrigerator failings, tornado warnings dispatched to the wrong counties. I’d like to airlock you, he said to her. But you’re better for burning. But he didn’t say it, of course. He was talking to himself. At the gallery on the night they met, the painter took the knife, smeared it across the horizon. All the other people there were salt and chert: celebrity weddings; ladders and mattresses. And every morning now the raw husk of sex pulls through the trees like a swallow finding his home. But if we fucked the au pair, she told him as they stared at three panels in black-and-white, our names would change at midnight. The next morning: a white bird hovered in the neighbor’s kitchen. He whistled, and it whistled back. The coffee pot sputtered a row of dazzling notes. Even the streetlights couldn’t help themselves. Like lamps in the desert.
Jay Robinson
www.barnowlreview.com
O Holy Insurgency
Mary Biddinger

once upon a time we took every living piece of us through every dirty trench we ever found and lost and discovered it was dead weight, that whatever the uniform or code of light, however we angle ourselves, it’s still just a grab at kite wind, mercury, but it’s okay; none of this has been gentle for a very, very long time.

'Nothing or Next to Nothing'

Ma warned me about women. Ma could be disarming and disturbing but she believed in spoiling me and my sister because she was Cuban and Cubans believe you need to spoil children to give them happy memories to fall back on when life turns into LIFE, the way my mother saw it: through cancer, mental breakdown, institutionalization. I did visit her there but my sister didn’t. My sister moved to Cuba with one of our cousins. The restless spirit of an older sister can be a motivating factor for someone as attached to family heritage as me. “Your sister is a slut,” said Ma over supper. I know that’s a reason I tried to hide my interest in women from Ma. “They’ll always disappoint you,” she said. “All my women friends stopped calling after I got sick.” She never got over this. Dad tried to call her friends back to her but Ma broke down before anything could be done. Sarah, my sister, was already gone. “Me duele el corazon pensando en ella,” Ma used Spanish, the language of compassion, for all emotional statements. “No me dejan, mi hijo precioso." So, I’m the son that didn’t go.
Bobbi Lurie
bobbilurie495@gmail.com
Scham / Shame
Robert Kelly, Birgit Kempker

Finally, after some hourly's credits rolled, I let my air out. Five AM, another moon passes his face, laying on concrete outside. Saw him get into some fight over origin of species, a where you from? and throw half a closed fist.
Guess the guy said the two looked the same to him, Cubano, Siciliano, whatever, right? Chains, dancing, drinking, dictators. Or something. And his laugh exploded, Capiche? he said, fingers splayed. This bicho, mi papi, disagreed. Well, the facts are just a lot of things that don't change, puto, he said, but who knows what that means. I looked out the window, stopped watching the boxed friends of late-night.
He pushed the other guy, Irish by the way he held his drinks and his gut. Three of his friends showed up—four Irishmen with a fifth, there's a statement—my Señor Perdedor lay in the steps, and morning came, paper boys gathering in a circle while the moon and sun exchanged words. Every day we play, he'll say stumbling in later, sun and moon shaking, and I'll turn back to the TV. But for now, I wait.
Molly Lurie-Marino

1
What did the doctors say? you ask. Something about Nazis and interrogation, the clicked heels of polished black boots, and that if my devils ever leave me, my angels will take flight, too.
2
Whom pain has brought to despair, but not yet to death, boulders, a tree stump, room after room of covered mirrors, if you’re going through hell, keep going.
3
Ten years or more of pills and ashes and the endless black windows of empty streets. Is it me? Is it? Or is there really a bird with a broken branch for a beak?
Howie Good
https://sites.google.com/site/whiteknucklepresscom/
The Devil All the Time
Donald Ray Pollock
Newer Posts Older Posts Home
Subscribe to: Posts (Atom)