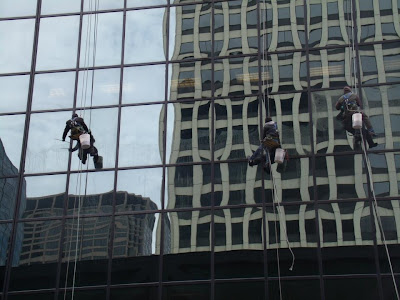 I HOPE SOMEONE LOVES ME ENOUGH TO CUT OFF MY HEAD
Andrew J. Stone

When I was a kid I broke my friend Frank's nose with a baseball bat and stood over him as he lay, screaming, blood covering his face and dripping down into his mouth.


A few years later, while I sat on my couch, Frank finger-fucked my sister's best friend on the floor in my basement while I watched The Simpsons. I heard her moans and smelled the inside of her body while Barney and Homer drank at Moe's.

When they were done, they laid on the floor for more than an hour, silent, seeming not to even breathe, perhaps waiting for me to leave, as if it was the getting up that shamed them. A few years later, he became addicted to heroin.

Today, my first visit home in years, I see that bat, my Louisville Slugger, in the corner of my parent's garage, among the fishing rods and bicycles and other forgotten things. I pick it up; it looks brand new. Not sure it's even the same bat, I spin it around. I see what I wrote on its side in permanent marker, what Frank had once ignored:

I HOPE SOMEONE LOVES ME ENOUGH TO CUT OFF MY HEAD - andrew j. stone

I hope someone loves me enough to cut off my head. It doesn’t have to be a close friend or family. It could be the mailman. It could be the person who sits two rows behind me on the bus. It could be you. All you would need is an ax or a machete or a butter knife. I see you sawing, hands moving back and forth and I feel the heat of my blood plopping down my chest. I feel alive. Then I feel the life running away from me like I’m threatening to destroy it, like it’s afraid of me. And the only thing I would ask in return is that just before my head detaches into your curled fingers, you tell me that you love me so much that you’re cutting off my head so you can carry it everywhere you go and look at my face whenever you want.

You filled your bag with rolls of film about to expire. The planks of the boardwalk were dusted in sand, a cold wind blew off the ocean, the approaching fall. You said you preferred people in your photographs. The Mexican boys selling rosaries from a backpack. The old women in pink Adidas jump suits sharing a can of beer. You couldn't believe the price of a hotdog. Old Coney Island, sitting next to the new. We saw a sign advertising a palm-sized woman. I suggested we have a look. It didn't occur to me we were paying a dollar each to see a midget. I don't think you realized it either. A midget in a rocking chair, a rocking chair in a trailer, a trailer in a dusty field. You asked her if this was how she made her money. She pointed to the camera around your neck, then to a sign behind her. She wanted you to take her picture, for an extra dollar. You hesitated, paid the money, and snapped. We walked the boardwalk, an awkward silence between us. The photo would never be seen. You would develop everything else except that one.

Gulls are mating. Last week I watched two starlings build a nest in an eave and I applauded the effort. But the gulls, I don’t know; no courtship, no shared experience, no fidelity.

I want to pass on a healthy distrust of people to you. I want you to know isolation. But solitude sounds nothing like a gift. And we are not one another. I do not have your social graces. You say I dislike people but I disagree. It is something else. If I pass it on to you maybe you could name it.

Little happens without a certain amount of abandon. There is a dent in my desk from a chair I upended in an argument. If some things do not matter then let the gulls fuck across every shingled peak, let the ex-lovers quarrel. But I am unconvinced.
I have seen the shape of you in someone’s arms. No, I have seen you fold to a stranger’s touch. You are in the highest boughs with a song and the wildest sways of the breeze. I am in the underbrush, turning over damp brown leaves, convinced of some dark thing’s existence.

Bruce Walsh
mr.brwalsh@gmail.com
The Sense of an Ending
Julian Barnes

I still thought you were beautiful even after you took off the long, blonde wig and took out the blue contact lenses and peeled off the fake eyebrows and the fake black lashes and the clip-on nose ring, wiped away the foundation, the rouge, the liner, the shadow, the mascara, the lipstick and gloss and plumper, wiped away the spay-on tan, the cover-up that hid the tiny whiteheads on your chin, took out the retainer with the two fake teeth wired to the front, stripped off the plastic fingernails with French tips, undid the water bra stuffed with socks and toilet paper, untied the corset, slipped off the high heels, pulled down the control-top tights, unscrewed your prosthetic arm. And I still thought you were beautiful when you showed me the scars on your abdomen and the one across your throat and the one that snakes along the top of your head. It reminds me of the serpent from the Garden of Eden, except this time the serpent is sewn into the ground, and Adam and Eve can do whatever they want.

My big brother’s #1 rule for dealing with women: stay the fuck away from girls who are really into horses.

But she’s so pretty, I think, as she rambles on and on about Snow Shoe, her tender loving horse. Pretty in a screwed up kinda way, like Victoria’s Secret underwear hugging that precious little puss and delicate little self-mutilation scars running up her inner thighs. Anyway, I’d put money on it. I know the type. Snow Shoe, apparently, has saved her from committing suicide, from running away, from murdering her rich parents in their sleep. What a horse...

What a crazy fucking girl! She runs out for a smoke every ten minutes, but it only takes her thirty seconds to finish one. And what do I do? I sit here and wait. I buy her another beer when her pint glass gets empty. I listen to Snow Shoe story after Snow Shoe story, hoping I get to find out if I’m right about the underwear. And the scars.

I did not cry at my father’s funeral. Not even when they lowered him into the ground to rot for all eternity. I left my mother who clutched at me like a beast. In her grieving madness she thanked me for being the strong one. As I was walking home I saw a man on the ground. He smelt like booze and piss. I tried to lift him and failed.

"What the fuck is wrong with you? You can’t just lie on the ground defeated. Get up you fucking bum."

I tried again. Same result. I kicked him in the stomach. He let out a groan.

I hovered over him, screaming in his face and started punching him around the head and neck. In-between blows he looked at me directly for the first time with his diluted blue eyes. I unclenched my fists and wrapped my arms around his chest and started weeping.

I stayed like that for a very long time. He did not move or say a thing. 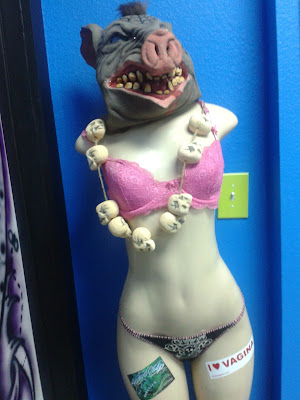