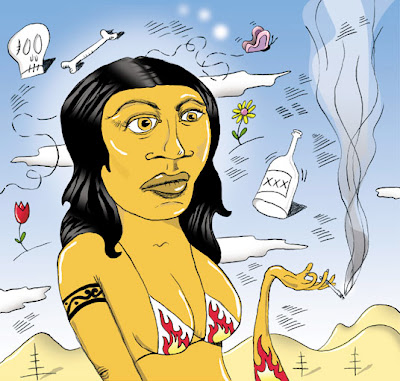 Finding a Polaroid of God in the parking lot of a place that sells camping equipment would make your day, no doubt. Think about it— all the people you could convince that faith is true, something to nurture, something to last— something for the coffee table, or a climate controlled vault complete with security and intercom, an heirloom for the child’s child.

Here the cynic adds: what about the fool’s fool who loses the photograph – that one great loss you never recover from. Should we weep? Do we help look for it? Take out an ad? Flea markets or eBay?

And if we were that fool, all flimsy threads that hold us above the ground breaking, what then?

I don’t think I could bear the sort of carelessness that leaves God, alone, a casualty of a heartless commerce that steals the soul – whatever that is.

And what’s to be made of the lucky one who stumbles over such a find? Happy accident? Synchronicity? No. Give that one your pity. There’s no place but down.

Some losses are final, but discovery, like Keats’ lovers, is the terrible tease.

I’m the cashier at CVS who girls feel weird buying tampons from. They know I’m thinking about them going home and sticking things inside them, that I’m guessing sometimes it feels good, a little like I might but smaller.

It’s dumb to pay a premium on a loaf of slice bread but I respect, in a perverted way, those career ladies who don’t have time for the supermarket. They stop here on the way home from whatever jobs require them to wear enough perfume that I smell them coming before they pass the photo kiosk.

My brother called me fag, said cashier implied girl and when I said screw you he said, fine check out boy. That makes sense.

I’m only doing this till school starts. Then I’m studying to be a financial planner, teach people how to build up their empires instead of pissing them away.

I feel a little bad for the shy girl with the pads because she’s pretty. She looks like having me ring her up is the worst thing she’s ever had to do.

IN THE FALL, A NEW UNKNOWN - david peak

The Poisoned Well stains the street two doors up from us—a constantly re-piling black cloud—and can’t stop having babies every few months or so, adjusting the straps of gas masks over their faces, straps slapping to their skulls, and shoving them off to the street corner so they can mill about, dead-eyed, slack-jawed, waiting for the horrible school bus to crank open its doors and spirit them off to the death camps.

The Toxic Flakes is the worst kind of knotted-up fibrous tumor, a rain-swollen blackhead, clicky with static and that clinging kind of co-dependency, hot and suffocating like polyester pants hot out the dryer. His kids are totally afraid of him, largely avoiding consuming meals in his company, those complex conspiracies of restrained farts and burnt tongues. They avoid helping out in the yard as he scrapes heaps of wet leaves off the gristly stump-field, lumpy—a throat full of misgivings.

It’s always raining in their horrible house, damp and rambling with homework assignments half-flushed down the toilet, the yellowed skeletons of forgotten housecats, needled jaws dried open in anticipation of the meal that might’ve saved.

Anna dropped off vintage clothes at the cleaners. She desired to do a shoot, but her model friends had moved to NYC, LA, Portland, and China. While summering in Greenwich Village, Anna hadn’t put up anything new in her store; however, her long, flowy dresses were still selling internationally, and she and her clothes were featured on vintage fashion blogs. Pre-Raphaelite paintings infused the consciousness of her rural, windblown shoots. While making art in the Village, someone she didn’t know from her hometown messaged her about modeling. She looked vaguely familiar and might work. At home, Anna sorted through a new package of 57 vintage dresses she bought for 33 cents a piece on line and others for half price at her favorite thrift store. She rushed out to drop off more clothes at the cleaners. A beautiful clerk helped her, and the silk pieces flashed static in their hands. Photos, poses, and vintage clothes shimmered through her as she realized who she was.

She crawled out of a crevice, having not been anywhere before, but with the slight memory, like a gentle residue, of having spent the afternoon with her father, listening to the entirety of his Beatles music collection. She had the sensation that this memory had been somewhere deeper. Somewhere that moss would’ve grown had there been water and sunshine, but this place lacked them both. There was the distinct feeling of relief as she emerged into the daylight, as though the sixties pop music had been resounding across a landscape blooming with cracking and rusty train tracks, overlapping and colliding and leading only back to themselves. Crawling out of a crevice she wondered what sort of giant hole she had gotten herself into now. A hole with a sky, but she didn’t know what a sky was. All she knew was that it hurt her eyes. The trees here were earnest. They spoke to her like John Lennon. As she pushed herself up from the ground and dusted off her clothes, she noticed her hands: imprints from blades of grass, and she decided her body was a canvas, an Etch-a-Sketch, a womb, a tree with rings. One ring, she points, a woman was born. This woman was born from the spot where rust ate away at a car and the wood bees gnawed at the log cabin. She was born from an absence, much like everyone else. She knew this: an empty space can be potent. See the tree branches lapping on the shore of a brick landscape, lapping onto another brick landscape, brick chimney chutes exhaling brick chimney chutes, and behind them an empty factory because people don’t need cartridges for typewriters anymore. She sticks her finger in her ear. It’s empty too except for the yellow wax. She sticks her finger in her nose. At least this abscess has hair. She wraps her fingers around her other fingers and realizes she can hold herself. She can identify her organs, the way her skin is her novel, showing age, a rust-colored tinge, somehow a reflection of her very own sky, of her birthplace, of the people and things that have been discarded in her lifetime.

In the next week these are the things that will happen to you. You will wake up, because this is what must occur to begin. Your eyes will change; in your newfound compound vision, you will see his back, and you will see your kitchen in the summertime, quietly making a small meal at sunset, and remember that familiar smell of opening trees and the clicking sound of gears as you ride your bike in circles around your hometown. Eat a grapefruit. It will remind you of your father and of ridged spoons and being spoon-fed. You will think about the placement of things in your body and where the organs lie this morning. When someone tells you something with certainty, say “no!” and leave. Refuse all advice. Think about your brain and how when you hone certain things for long enough, the possibilities of other things begin to dry up; they become overgrown, imprecise, forgotten. You will stop picturing things that you once wanted: the way things look different when you love them. You will start a puzzle. You will regret having started the puzzle; you will begin a book. You will realize you are re-writing a book you’d already wrote, so you will go and find that old book and read it. Then you will go to a different coffee shop and watch a middle-aged couple from over the rim of your laptop. Watch their hands, their bodies leaning in across the table, how they don’t have to look up: they already know. You will make a list of the things you know about yourself. The first thing will be that you are uncertain. You will no longer be able to continue the list because you won’t know what to write. You will want to know things. You might chalk it up to the condition of things; say it was situational. You can delay blame even longer. This week, you will say you didn’t lose anything, you will say there was nothing to begin with, you will show the wrinkles on your hands and say you have thicker skin; this week, you will make no progress. It will end and you will think about the future after this week. You will think about last year when you lay in the grass holding hands and you will think about now and the absence of someone. You will think about this and make statements like: I have never wanted forever except after people are gone. You will read your horoscope and wonder if you made the wrong decision.