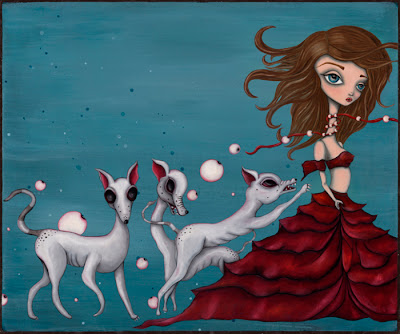 There ain't shit to do in Valentine, Nebraska, when you're 22 and jobless. When she's the one you still love even though she left a year ago. When you're alone on the suicide dog bridge and no dogs are coming and you just hope that one of them will come running and jump, so you can watch it fall and fall.

Fiona said she'd love me forever, even though it was over. How that was bullshit. How I wished it was true.

Fifteen dogs in the last twenty years. A Shih Tzu, Goldens, German Shepherds. Something about the bridge. Some say the bridge is haunted, that the dogs chase ghosts.

There are other words for it: superstition, longing, regret.

I'd held a dead one before, below on the rocks. Stroked its fur, its eyes. Wished it alive and shook it. I shook and shook, like my hands were defibrillators, full of lightning.

“You'll forget me,” I'd told Fiona and she said never, like a spell, and you said, “forgetting's not something you plan.”

The suicide dogs don't come. They only jump when no one's watching, when they are brave and think they can fly.