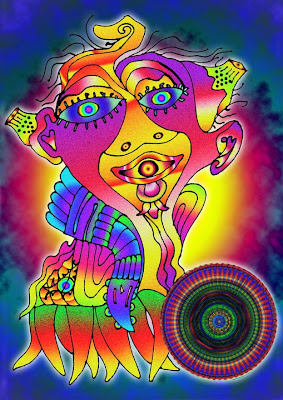 The haystack summer lies down like a sleeping dog and waits while my Dad and I string boisterous bamboo fishing poles on the back porch and listen, in brash, as the faceless man on the radio warns the storm, two bastard twisters--twins the voice cries. The tornado sirens begin their groan, as they do -- the long, low drone like giants humming across a field. Suddenly, birds lose their treaty with wind and become drunk with quiet effort for flight.

Dad hasn’t peeled himself away from the wicker chair just yet, but he’s careful to snub out his cigarette for fear of it igniting the charged air around him. I picture him exploding in self defense. He’s already pretending to be in the war. Maybe Normandy, 1944 with bombers above. He rises and studies the sky as if to read the angry clouds like a book. Blistered fingers growing tight around the bamboo pole, all he can do is cling to it like a rifle.