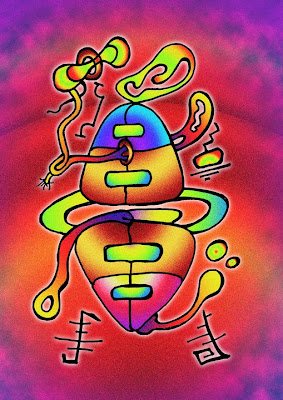 i am so bitter about fish rights. i am so bitter about fish rights that this red food colouring's raising fountains out my fucking joints. i am bitter cause you said you searched down down the slits of her gums, but that doesn't even make any sense. so here's the thing, fish rights. i accidentally died during an autoerotic hanging, and someone branded 'swedish' against the margins of my hips. speared my veiled laboratory of scales and sucked me dry before the bite. glassy girlish stutter. i'm tied up in jello moulds of syntax, gummy and sudden. you squished your fingers in the very part where the d of 'swedish' tracked the 'i' of 'fish', so i stripped off my skin because i, well, it was my way of saying i wanted to dump this sorry ass. the gig was unpaid anyway. the i, that is.

this is thousand year old shame. longitudes and latitudes exist in the strip between gills and a woman, and fyi, it's waxed. in this one they were playing 'carnival'. but i think they are less prepared for a second survivor. i am so fucking bitter about fish rights, i frosted the surface of your lips with traces of an uncommon blood.